Jeevacharithram (The Biography): A Novelistic Drama
A.C. Sreehari
Theatre is at once a showcase and a forum, a medium through which a society’s ideas can be displayed and its conflicts, dilemmas and struggles can be debated.

The drama produced & presented by Central Arts, Vellur, in Payyanur, ‘Jeevacharithram’ (The Biography) belongs to the theatre of debate. It is not a drama of an individual’s will but of a society. Biography, originally conceived by the West as one of an individual’s story is shifted to that of a society. The zest for social life so abundantly felt in a dynamic age pulsates in every inch of the drama.
Theatre remained largely a male bastion. Women, Nature, all the other phenomenon existed in the margins. The drama openly seeks to disrupt complacency with this status quo and comment on the immediate day-to-day issues. It is a powerful political act as well as uninhibited aesthetic exploration.
Not to portray a character as a hero or even as a credible force for change in society is an anathema for the conventional eye. To eschew dramatic conclusion and climax also is unthinkable. No once is a principal character or protagonist in this drama but the society.
All the world is a stage to Shakespeare and here this drama explores how stage is also a world. A seemingly helpless populace of a village in Kasaragod comes to the centre of the stage/world and the centripetal is undermined by the centrifugal forces. Serious and sober public demands more intelligent and focused responses to major issues and no more gigantic cut outs of heroes, ‘noble savages’, saintly mothers or brainless play things- a malady of the mainstream drama. The dalit, damit, feminist causes are made part of the class struggle. The Communist Manifesto read out in the drama manifests the political base up on which the drama is built up.
This drama imagines the death of the family, private property and the state in the true sense of the term. Champan is not able to continue his conjugal tie, Balakrishnan Nambiar disowns his properties & Chomaru resists the state intervention in to their affairs-the three significant characters of the drama.
The great Aristotalian Unities, the textual version of imperialism, is broken by introducing  innovative digressions to John Abraham et al. Tragedy, a male play, is given a hit by introducing carnivalesque laughter as things once thought as daring  have become routine and common place.
One of the greatest achievements of this drama has been the ruthless democratisation of art of the multiplicity of struggling and often competing voices. ‘The Biography’ attempts an (alter) native historiography, in the body language of the underdogs.
N. Sasidharan & S.  Sunil - the makers, and the actors like Babu Annur, Rajitha Madhu, Sargam Damu, Ramesan, Suresan, Krishnan, Ajayan, and two young ones - all go to make this play unconventional by unlearning the concept of the traditional drama by breathing a novelistic life into the theatrical form.
Theatrical representation is finite and leaves behind it, behind its actual presence, no trace, no object to carry off. It is neither a book nor a work, but an energy and in this sense it is the only art of life as Derrida has put it. 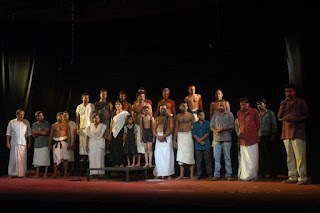 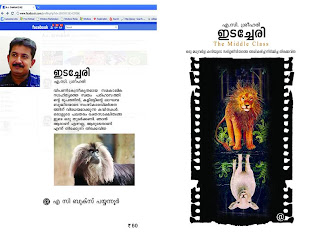 Email ThisBlogThis!Share to TwitterShare to FacebookShare to Pinterest
Labels: EDACHERY: A SCREEN POEM 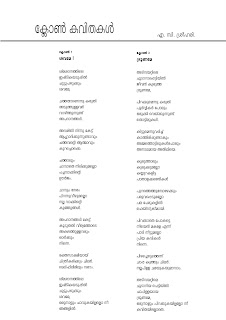 Silk Smitha's Death: A Flash Back

While you stripped off
Your outfits
One by one
No one thought
Dear Smitha,
That you would strip off
The outfits of your soul,
That you would do a striptease
On the noosed piece of a rope
That,
Behind closed doors,
You would expose your mind’s nudity.

When the voyeuristic eyes in
Cinema halls
Undressed you
Neither Lord Krishna nor Krishnadwaipaayana
Came with a piece of cloth.

You, the Radha of
The fantasies of a thousand guys,
No one cares for you today.
They are there,
Sleepless, hot and sticky
In the streets of beauty pageants
Devouring blue beauties.

To be Kannans’s Radhika
To be Kannuan’s Shakuntala
To sleep cozily beside
The rhythmic shades of the flute
To leave home, bidding adieu to
The once nurtured creepers,
To bask in the spiritual aura
Of ideal love,
Like Virgins and Aarchaas
Were you so eager?

But what awaited you were
The camera eyes of
The guys of our age,
Unacknowledged
Her Nights,
Urbanized slums
And their pauper castles.
Benumbed waist
And its monotonous pangs.

There was no chance for you
To be Kannaki’s anklet
To be Unniyarcha’s uri
To be Jhansi’s sword
To be a single breasted
And
Burn empires,
Deconstruct the world
And rewrite myths.

Your tongue twisted
Your back turned
You were taught to flirt,
To crawl in feigned coyness
And to at(ex)tract masculinities.
Your masters will not teach you
To burn empires and rewrite myths.

But still,
You be grateful to us
For not stripping you
As you lay, bare and dissected
In the grave,
For covering your body with a shroud.

For not pasting your name
In the wasted pages of history
And destroying your herstory.

For not canonizing you,
With cries and hymns
Vestiges and mysteries,
As a holy mother. 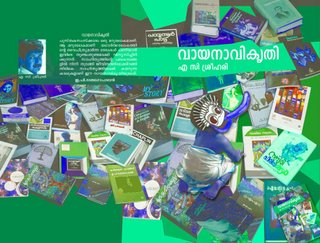 nothing less than
a suicide to say
i was here

a role in the rackets
to show
i will be here

how can poets be more prosaic
to express
so simple a life ?
Posted by A. C. Sreehari at 12:45 PM 5 comments:

Words are lovely, dark and deep

We read and never read a poem twice alike. When I was a schoolboy I had read ‘Stopping by Woods on a Snowy Evening’. I had felt it making a clarion call, sensitising me on the need for being very alert and active and move forward despite the beckoning beauties of the world. Nothing can bother us if we have a clear destination.

By the time I reached for my post graduation things had begun to change. My teacher over there read the poem in a different fashion altogether. It was never a clarion call; rather it was quite the opposite.

The last lines are not even audible. A weak and tired voice speaks of the beauties of the world and how his duties prevent him from enjoying it, is the meaning I got from the second reading.

One would wonder how the very same poem could produce quite the opposite meaning while one reads it for a second time? What would have Robert Frost meant when he wrote the poem- one doesn’t know. He is not necessarily the first or the last person to comment upon his poem. As an institution the poet is dead, one can say. The poem can speak on its own, inspite of the poet. Or the context of reading the poem changes the text of the poem. Nehru read the poem in the days of a great national movement and no wonder he identified himself with the traveler in the poem. We read the poem from a different perspective.

Can’t there be a single, stable meaning for a poem? Of course. But the politics of the reader can suppress or open up certain meanings of the poem for the other. Or the ideology of the reading can make it a different discourse.
The point will be more clear if we read two Malayalam versions of the poem.

N V Krishna Warrior had given a translation to it that never could satisfy the schoolboy in me in those days. The spirit I imbibed in the class room was found totally absent in his translated version. His translation is loosely built up in the very ordinary Malayalam metre- keka. It reads like this:
Mohanam vanam sandragahanam neelesyamam/ Njan pakshe palikkenamottere prathijnakal/ Pokanamere dooram veenurangeedum mumbe/ Pokanamere dooram veenurangeedum mumbe.
The metre doesn’t permit me to take it for a clarion call. Later when I got the PG version of the poem of Prof. P K G Vijayaram, this translation appealed to me then and there.

But the schoolboy in me once again became happy when I came across Katammanitta Ramakrishnan’s translation of the poem. It reads like this.

Though politically poles apart Katammanitta joins hands with Nehru. The staccato rhythm of the horse’s hoofs is heard here. The tight form of the Sanskrit metre enables him to achieve this meaning. And the energy of the producer of Kurathi and Kattalan could also be found in his reading, to a certain extent.

Which one is the correct reading of the poem, ’Stopping by Woods on a Snowy Evening’? Not all these readings are alike. They differ in degree. They differ in meaning.
Posted by A. C. Sreehari at 8:07 AM 7 comments:

A. C. Sreehari
A Jack of All Trades and Master of Arts